PMI updated the PMP exam on January 12, 2016 to align with the latest PMP Exam Content Outline, June 2015. PMI announced that 25% of the exam questions were updated as a result of this change. Does it mean that my PMP exam preparation need to change? Does my exam prep material also change by 25%? What are the new topics on the exam? Where do I get the study material for the new topics? Should I wait for a few months before taking the new exam? Has the exam passing score changed? What is this Role Delineation Study (RDS) thing? Is the PMP exam still based on PMBOK Guide or is it now based on the PMP Exam Content Outline (what’s the difference between the two, BTW)? If you have any of these questions, this post is for you.

Hundreds of websites and blogs have been abuzz on the topic of PMP Exam Change 2016 ever since the news broke out in the first half of 2015. And why not? It’s a great opportunity for the training providers of the highly commercialized and well-marketed PMP certification. When do people remember God the most? In times of adversity, isn’t it? You get the point. Unfortunately, most of these sites and blogs have been simply regurgitating the information posted by PMI in public domain, and missing the point (which I’ll share later in this post). Recently someone asked me about the PMP Exam 2016 change on PM Hangout and how it impacts PMP exam prep. That exchange encouraged me to do this post, my first in nearly a year.

Disclaimer: This post (series) is my take on the PMP Exam 2016 changes. Some of the conclusions I draw are based on my experience and are not endorsed by PMI. Please use the information for what it’s worth.

So, has the PMP exam really changed by 25%, or is it more hype than substance? If you were to ask some of the PMP Training providers they’ll tell you à la Apple:

The only thing that's changed is everything.

But, is that really true? Let’s find out. I’ll start with the most basic information.

What? I thought the PMP exam was based on the PMBOK Guide.

Although many of the domains, tasks, knowledge, and skills outlined in the PMP Examination Content Outline are also covered in the PMBOK® Guide, there are some that are unique to the PMP Examination Content Outline. Candidates studying for the examination will certainly want to include the current edition of the PMBOK® Guide as one of their references, and would be well advised to read other current titles on project management. An excellent source of these titles, utilized in PMP examination development, is found in the PMI member resource eReads and Reference.

What is the PMBOK Guide?

What is the PMP Handbook?

The PMP handbook contains information on how to apply for the PMP certification. It also provides important information about the policies and procedures for obtaining and maintaining the PMP credential. If you want to know information such as the PMP application process, the exam fee, the exam duration, or the number of questions on the exam, PMP Handbook is what you would refer to. But if you want to know the “syllabus” for PMP exam, you would refer to the PMP Exam Content Outline.

How often is the RDS conducted?

How often is the PMBOK Guide updated?

How do the PMBOK Guide and PMP Exam Content Outline updates affect the PMP exam? 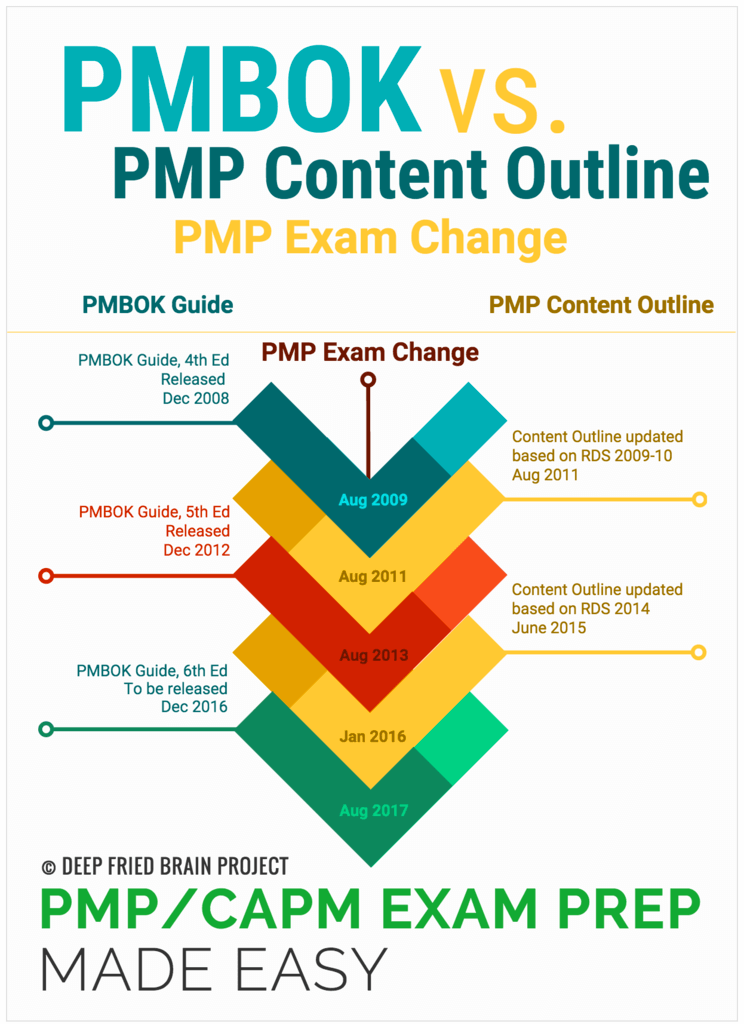 In conclusion, the changes are not as drastic as it may sound. In part 2 of this post, I’ll explain in detail what those 25% of the changes might be, what new topics are unique to the Content Outline June 2015, and what PMP aspirants need to do in order to cope with those changes. Stay tuned.

Let me know whether you found this post useful by sharing your comments below.

P.S. This is my first blog post of 2016 and the first after 11 months. Part of the reason why I do not blog more often is that almost anything I post gets copied in some form or another with absolutely no attribution to my work. I have some great admirers in Hong Kong, Pakistan, India and a few other countries who have made a living for themselves by regurgitating the content, which I had crafted by spending endless days and nights. You could argue that “imitation is the best form of flattery”. I say that by feeding their families, I’m glad to have played my part in reducing world hunger :)

Brilliant as always... I just come to your site for any Information i need.

Madhukar - Thanks for the motivation to write more often :)

Very clear and very helpful, many thanks

Greetings, Thank you. I am grateful for your efforts and work despite the illegal and unethical activities.

Thanks for your appreciation, Terry.

I love your work and will recommend it to others. It is a job well done. However, I will like you to throw more light on project management simulation, expected monetary value and sensitivity analysis.

Thanks for your positive feedback. I’ll surely work on those topics but given my current situation, it may take a while. I also apologize for not acknowledging your comments sooner.