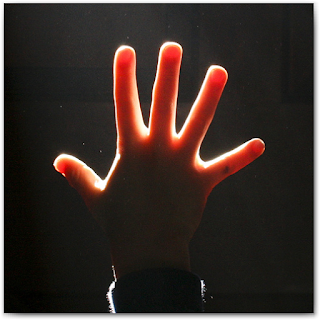 Top 5 Mistakes to Avoid for the PMP Exam

I expected this option to get more votes. This is surely among my top 3 reasons why people fail the PMP exam. In my personal opinion, no matter which study material you refer to or which training you attend, reading the PMBOK Guide, cover to cover, at least 2 times, in a must. I realized this when I was taking my exam. This is also a common theme in most lessons learned posted by successful candidates.

Actually this option got only 7% votes, but I also added up the votes from option “They don’t attempt enough good quality sample exams”, because both are kind of related. This should be no surprise to anyone. If you don’t have access to the best study material, your chances of success on the exam are slim.

I thought this would be no. 1 or 2. PMP certification is achieving a cult status specially among IT programmers in different parts of the world. I would probably do a separate post on this topic and avoid delving into it right now, as it is potentially controversial.

2. Their real-world Project Management is different from the PMI-way - 21%

We are not living in a “perfect world” and our projects are not managed in the perfect way. The trick to passing the PMP exam is to bridge the gap between real-world and PMI-world. The sooner you bridge this gap, the better your chances of success (on PMP exam) are.

And the winner is (drums roll) …

This was the biggest surprise for me in this survey. I admit that not preparing “well enough” is sort of vague. I’m inclined to think that to most people who voted, it means that people do not put in adequate effort, or tend to underestimate the PMP exam. But how do you know that you are “ready” for the PMP exam? There are no benchmarks to measure your preparedness for the exam. Most people tend to go by their scores on sample exam and try to compare them with those from their peers. I’ll do a separate post on this topic to share my thoughts.

If you add up the votes from the 5 options above, 90% of the readers think that people fail the PMP exam because of one or more of these 5 reasons. So, don’t blame it on your luck, don’t say that the exam is too difficult, and don’t try to think that you are not smart enough to pass. To review complete survey results, click on the image below: 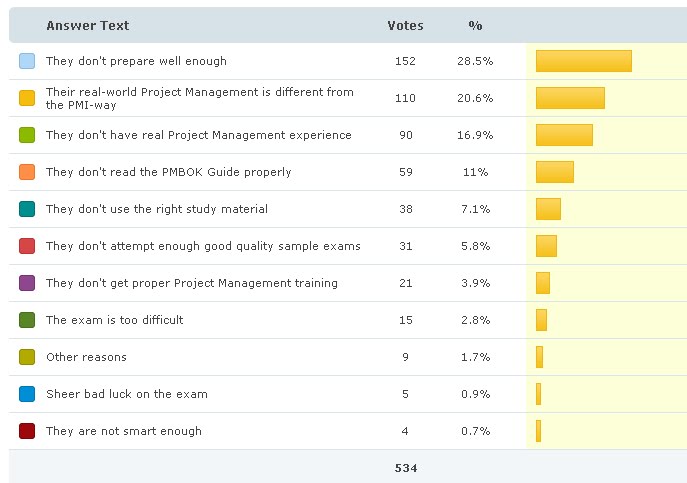 Top 5 Mistakes to Avoid for the PMP Exam

Now that we know the reasons why most people fail the PMP exam, what are the lessons that we can learn from this information to better equip ourselves to pass the PMP exam?

I hope that by avoiding these common pitfalls, you’ll improve your chances of success on the PMP exam. I wish you all the best.

Please share your own lessons learned in the comments section below.

Mnemonics for PMP and CAPM Certifications

10 Articles which every PMP Aspirant must Read

PMP lessons learned and exam tips - How to Become a PMP, 100 FAQs for PMP, One stop shop for all PMP resources, Free Sample Exams for PMP, Common Myths about...

Top lessons learned that all PMP exam-takers learned the hard way. Learn from their mistakes and avoid these common pitfalls.

Why do people fail the PMP Exam?

During a recent discussion in a Project Management seminar, I was surprised that experienced Project Managers (with more than 5+ years in managing projects alone) also fail more often than expected.

The reason quoted was the #2 reason in the post. Most people taking the exam select what they would do in such a situation in "their current project in their current organization"!

Such disassociation does not come easily and they can get into an argument mode.

That's a great piece of supporting information for this poll.

I would rather say that the #2 reason may in fact be the #1 reason, because the #1 reason (people do not prepare well enough) is short of vague and kind of all-encompassing.

Thanks for sharing your thoughts.

Thank you for this post. As I am studying now for the PMP, this information comes at a very good time.
Thank again, for all that you are doing here. It is a big help!
- Jason Martin

Thanks a lot for these useful advices
about PMP exam
sara

Hi Harry.... I have successfully passed PMP exam. Thanks a ton for your materials in this blog. It really helped me to learn and understand lot of terms and techniques than PMBOK and any other pmp prep books.

Also a special thanks for all the bloggers posting comments in this blog. Your questions and answers also helped me to learn alot.

Hope to learn more from here..

Personally, I think having real world PM experience only helps with some sections of the exam and even then, just helps you to quickly eliminate wrong answers. I found it particularly helpful with questions on procurement which were very easy based on what I'd done in my previous jobs. My PM experience definitely helped in understanding a lot of the topics quickly, but I think you have to start with a fresh piece of paper when starting PMP. That's the same for any sort of course you attend though, whether non-technical or technical as you're signing up to that vendor's way of thinking, so need to disassociate it from things you've learned for the purposes of passing the exam.

As for the exam itself, its not to be underestimated. I think that's maybe a better way of putting it rather than saying its too difficult. A lot of people on study forums seem to be wanting an easy way to pass the exam, but the reality is that you need to know the material if you're going to pass. Some of the questions can be very tricky to digest and understand unless you've done a lot of prep and that includes a reasonable amount of time doing practice exam questions.

I beg to disagree on reason top number 5. I didn't read the boring PMBoK. I didn't even see the shadow of it. And I still managed to pass with all proficient but 1 moderately proficient rating. I am a 12-year PM (mostly Govt contracts - this should give you a clue!). I read Andy Crowe's book and the practice set in Head First (http://www.headfirstlabs.com/PMP/free_exam/) . It took me 3 months or serious but not monk-style studying. Most people who fail the exam didn't really understand the concepts. While memorizing might help you pass, it's always better to really understand the concepts.

Thanks for sharing your experience. You might disagree with the post, but I do NOT disagree with you. Reason no. 3 says "People do not have real project management experience", and I also put a comment below it saying that it is my no. 1 or 2 reason for failing the PMP exam. You have just helped me to prove that point!

The 5 points mentioned above are only showing the results of the survey. They are NOT my opinion.

Obviously your 12 years of solid project management experience gives you a significant advantage, and helps you fill the gap.

Having said all this, I still want to highlight that PMP exam tests more of "theoretical" knowledge than real project management competence. We have a very interesting debate raging on this page - Popular Myths about PMP Passing Score . You might want to join us there and share your thoughts.

Thanks a lot for adding value to this thread with your insightful comments.

I had cleared my PMP yesterday after my last 6 months of PMP preparation.My most challenge was to answer all the Questions in 4 Hours as when I took Mock Test on many sites.I was always falling short of 15-20 Questions running short of time.So best option available to me was to mark the question and choose one correct answer from your inner instinct.There were number of questions from ITTO for which had devoted nearly 3 Months out of 6 months preparation which had really helped me a lot in actual examination.Second is very easy EV cost calculations,all of them were really simple.Third is actual scenerio testing where you have to apply both PMBOK and your real PM experience.I became very happy to clear this examination on my first attempt

hi there, yesterday i passed pmp exam.
it was the first time I tried it. I studied since february 2 days during the week-almost 4 hours a week.

u have to be focused on the goal and remember pmp is an exam. experience can help u but it's different theory from real life.

Congratulations and thanks for sharing your experience. Please share your lessons learned in detail on PM Hangout .

I took the PMP exam yesterday and FAILED with flying colors. I studied for months, did intensive study for 4 days leading up to the exam, read the PMBOK more than once, did a crash course using Andy Crowe-based materials, did 2 practice exams and numerous 20-50 question practice sessions.

The biggest disconnect for me was the writing style of the test. I found some of the questions nearly incomprehensible due to extremely poor grammar. I had to read the questions 2-3 times before I could understand the question; yes, English is my first language. I came across this blog while looking for other sources beyond AC. I look forward to exploring it, looks like a great resource.

I'm sorry to hear this. I remember that on my PMP exam (5 years ago), I had some poorly worded questions too, and some with typos!

I guess you may be just unlucky. Try to study from other books and take more sample questions from a variety of sources. I'm sure you'll crack it soon. It's not that difficult.

Often with extreme confidence comes extreme disappointment, and this past weekend, when expecting a pass (due to my "gut" feeling after answering all 200 questions), being told I failed was especially bitter!

Two days later, and after considerable contemplation, these are the lessons learned I will take with me when (or if) I retake the exam:

1) Forget about percentages that you get in practice exams. The ONLY thing that matters in the PMP exam is being Proficient, Moderately Proficient or Below Proficient. More than anything else, this mindset set me up for failure, and was a costly and painful lesson. For the record, I was MP in Initiating, Executing and Closing, and BP in Planning and Monitoring and Control.

3) The only way I see a pass in my future is to be MP or Proficient in ALL the knowledge areas!

This said, I find the PMI's approach to this exam asinine, from the insanely expensive cost to retake ($275 USD), to the fact that other than indicating the areas you were BP, you cannot see what types of questions you answered wrong. This means that they can "decide" pretty much anything, and decide if you pass or fail at their whim. I wonder if they did this because too many people were passing with the previous, more open and honest, exam system (prior to 2006)?

Now it is time to do a cost-benefit analysis to retake the exam, and then if it is positive, prepare an action plan that will better prepare me for the next time. However, right now, a few weeks of R&R are in order...